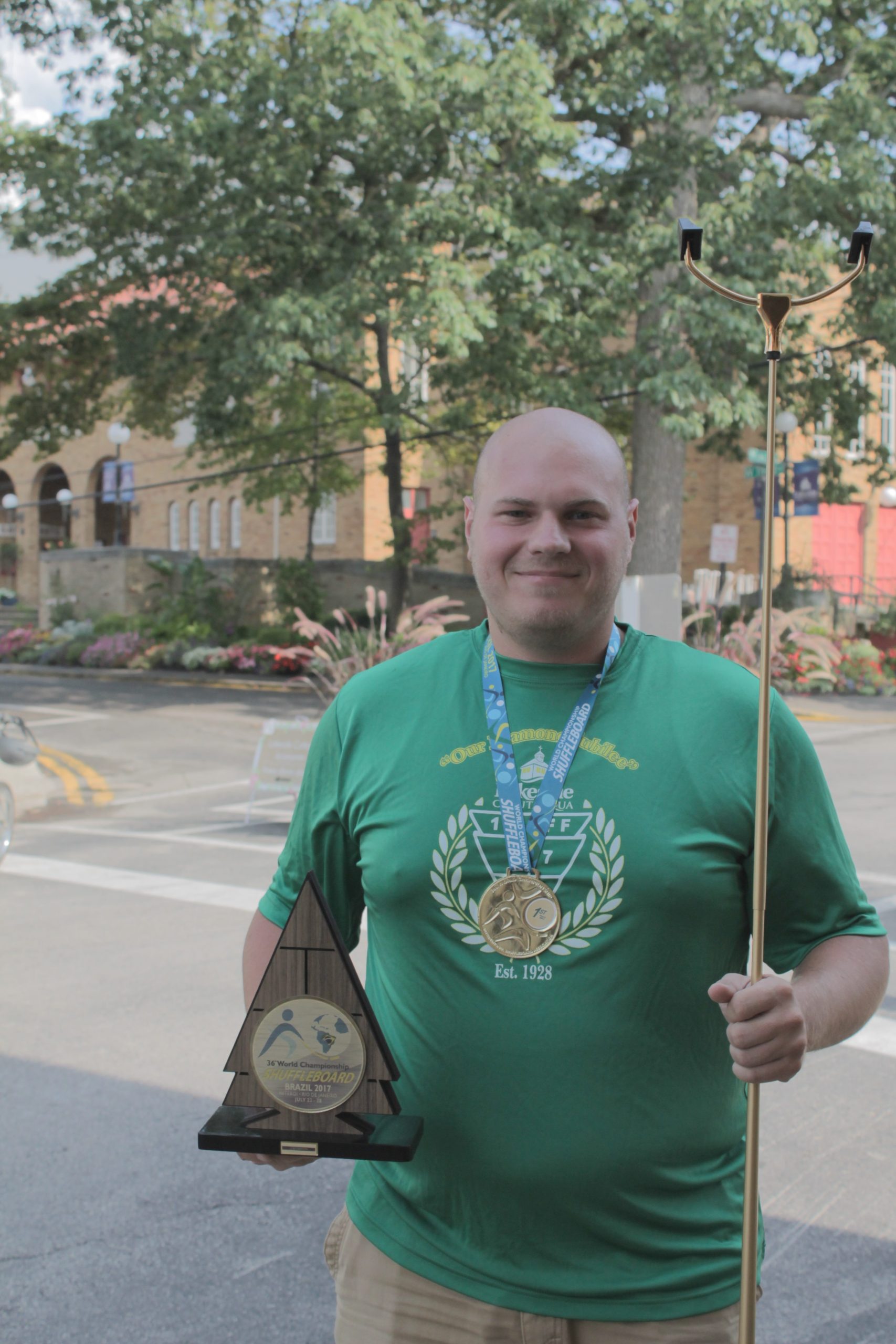 On July 28, after a week of tournament play, Michael Hirsch claimed the sought-after golden cue in Niteroi, a city in Rio, Brazil.

According to the ISA, “Michael is one of the wunderkinds who learned to play shuffleboard on the storied courts of Lakeside Chautauqua in northern Ohio.”

“In 2010, when I was 17, the ISA allowed youth to play in the international tournament for the first time” Hirsch said. “Three of us from Lakeside went – Anthony Ramicone, Riley Hubbard and me. We all grew up playing here at Lakeside, and we learned to play well.”

For the ISA international tournaments, Hirsch said that players qualify for the tournament based on an application they submit that details how long they’ve been playing, what other tournaments they’ve played in, etc. There are no qualifying tournaments to enter; it’s based on your overall playing history.

At the tournament in Brazil, there were 38 men and 26 women. There were players from Japan, Australia, Germany, Canada, Norway and of course Brazil and the United States.

The tournament was round robin style. Out of the first round of play, 16 players move on and are divided into four groups of four, with the top player from each of those groups going on to play for the top four spots.

“In the first round, I struggled,” Hirsch said. “I think I went 5-4 and we had to do a speed shuffle (a tiebreaker) because there were three of us tied with the same record, and we all had a win against each other. I won that and made it to the top 16. Then I went 2-1 in my group of four, won another tiebreaker and made it into the top four to play for the championship.”

In the top four, Hirsch won both of his matches, with the final championship match actually being a rematch with someone he had played against in the first round, German player Sefan Stadtmüller.

“Luckily, I started playing better as the week went on,” Hirsch said.

Aside from the competition, Hirsch enjoyed the Brazilian sightseeing, food and culture. He was able to take in sights such as Christ the Redeemer, Sugarloaf Mountain and Guanabara Bay.

Hirsch has been coming to Lakeside ever since he was born and he has memories of playing shuffleboard and going to the beach.

Originally born in Cleveland, he grew up in Lakeside, went to Danbury High School, then to the University of Toledo to study engineering before taking a job as a process engineer at Magna in Northwood.

“I’ve been playing shuffleboard for more than 20 years, and I’m grateful that being good at it has allowed me to keep playing,” he said. “I’ve been able to see a few different countries because of it, and I hope to see some more.

The last Lakesider to win the ISA singles tournament was Bob Jones in 2015, who placed fifth in the 2017 tournament. Jones, along with Bob Sudomir, Rich Phifer, Lary Faris, Earl Mencel and Al Ramicone, was a large influence and coach for Hirsch when he was learning to play in Lakeside.

“I really want to thank these guys, the Lakeside community and of course my family for their continuous support,” Hirsch said.

Teach Children about Giving Back on #GivingTuesday