A Royal Visit to Lakeside 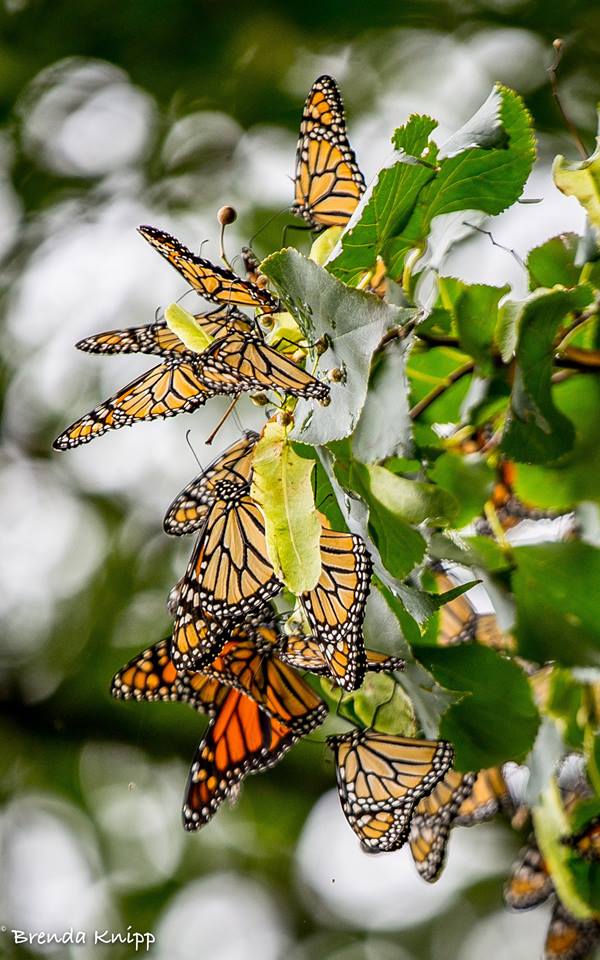 It was a collision of two of nature’s greatest phenomena, an insect migration and a hurricane, in a drama played out over Lake Erie. Southbound monarch butterflies, travelers they are called, the last generation of the 2018 broods, were headed out of Canada on a course for Mexico. They had caught the strong winds of a Nor’easter, heedless of weather reports calling for wind gusts of 40 knots. They were clueless of the stalled remnants of Hurricane Gordon, spilling the last of his coastal waters on a three-day binge in Ottawa County, Ohio.

The travelers made landfall, exhausted and spent from fighting the storm. They landed on any purchase to which they could cling. Reports started coming across social media with photos to verify. Hundreds upon hundreds of monarchs were stacking up on vegetation from Whiskey Island off Cleveland’s shore, all along the lakefront to the Ottawa National Wildlife Refuge on the western edge of our county on both Sept. 9 and 10.

By grace and fortune, wings landed in Lakeside as well. On Sept. 10, monarchs gathered en masse near the pavilion, a mere stone’s throw from the Angel Garden. It was a fitting temporary resting spot for the monarchs on course to arrive in Mexico the first week of November, in time for the local celebration of Dia de Muertos, or Day of the Dead (or All Souls’ Day).  Tradition has it, monarchs are the souls of the ones who have passed during the year, returning to their loved ones.

We may like to think of them as “our” monarchs, but they were only on loan for a short time.  As the first ones arrived on our shore and found suitable shelter from the wind, they huddled together. Numbers kept growing. Ten and then twenty, their paper-like wings subdued when closed, suddenly flashed brilliant orange as if to telegraph their presence to the ones who followed. The low-hanging shrubs were soon filled with this miracle of migration, in the humble form of an insect: butterflies.

Word went out through the community and the lucky ones were able to see the flame-colored wings lighting the shrubbery as if fall color had arrived in but an hour.  Photos were taken, blessings counted. Who knew the very next day those beauties would be launching south despite the ongoing drizzle? This was likely to be a once-in-a-lifetime event for Lakesiders.

Yes, the sheer numbers of this year’s monarchs give us reason for hope after decades of well-documented decline.  But insects are cyclical, one good year does not mean a trend.  This outstanding 2018 final brood may have one more hurricane to cross before they reach Mexico and the relative safety of the oyamel fir forests where they winter. Hopefully, the winter will be mild. Maybe the illegal oyamel fir timbering will have stopped, and maybe, these travelers’ successive generations will find enough milkweed for their young to feed upon on their return to Lakeside in spring of 2019.

We could resolve to welcome next year’s migrants to our shores with food and habitat suitable to help this species’ recovery.  Lakeside seems like the perfect place for a flower offering of pesticide-free gardens.

After all, what do we have to lose, other than an absolute miracle of nature?

History of the Steele Memorial Bandstand/Gazebo

Journey Through the Bible