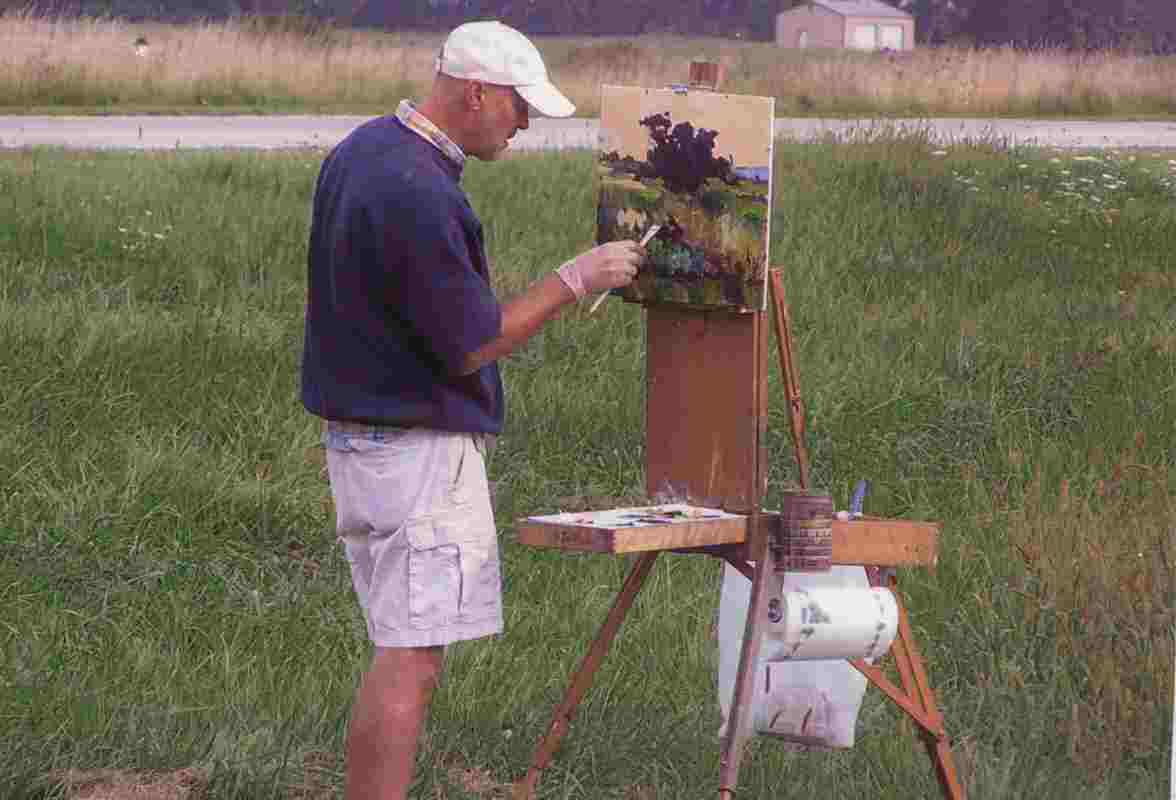 Rick Dziak was born and raised in Marblehead, Ohio. Ask him about his first Lakeside experience, and he simply replies that Lakeside was “always there” – he worked at the drug store with his mother before it became The Shade Tree, he attended school on Walnut Avenue for the first four years of elementary school and moved to the school now on Route 163, and he even sold his first painting at the Lakeside Art Show in 1961.

Dziak has loved painting since he was in elementary school, where Eleanor Durr was his art teacher. Unfortunately, art was only a part of the curriculum up to the sixth grade. Determined to follow his passion, he asked for a set of oil paints for Christmas when he was 14, and Santa obliged.

With this paint set, Dziak created the first piece of art he would sell, which was purchased by an administrator of Lakeside at the time, Willard Durfey. When asked how it felt to sell his first piece, he laughed and jokingly said, “jipped.” I quickly learned he is a man to do the unexpected.

Working the soda fountain one day, Dziak’s mother told him Durfey was interested in buying his painting for $15 because he wanted to keep it in his office. A young Dziak retorted the price was $25. His wise mother, a voice of reason, said to take the money and not to worry. He took her advice. 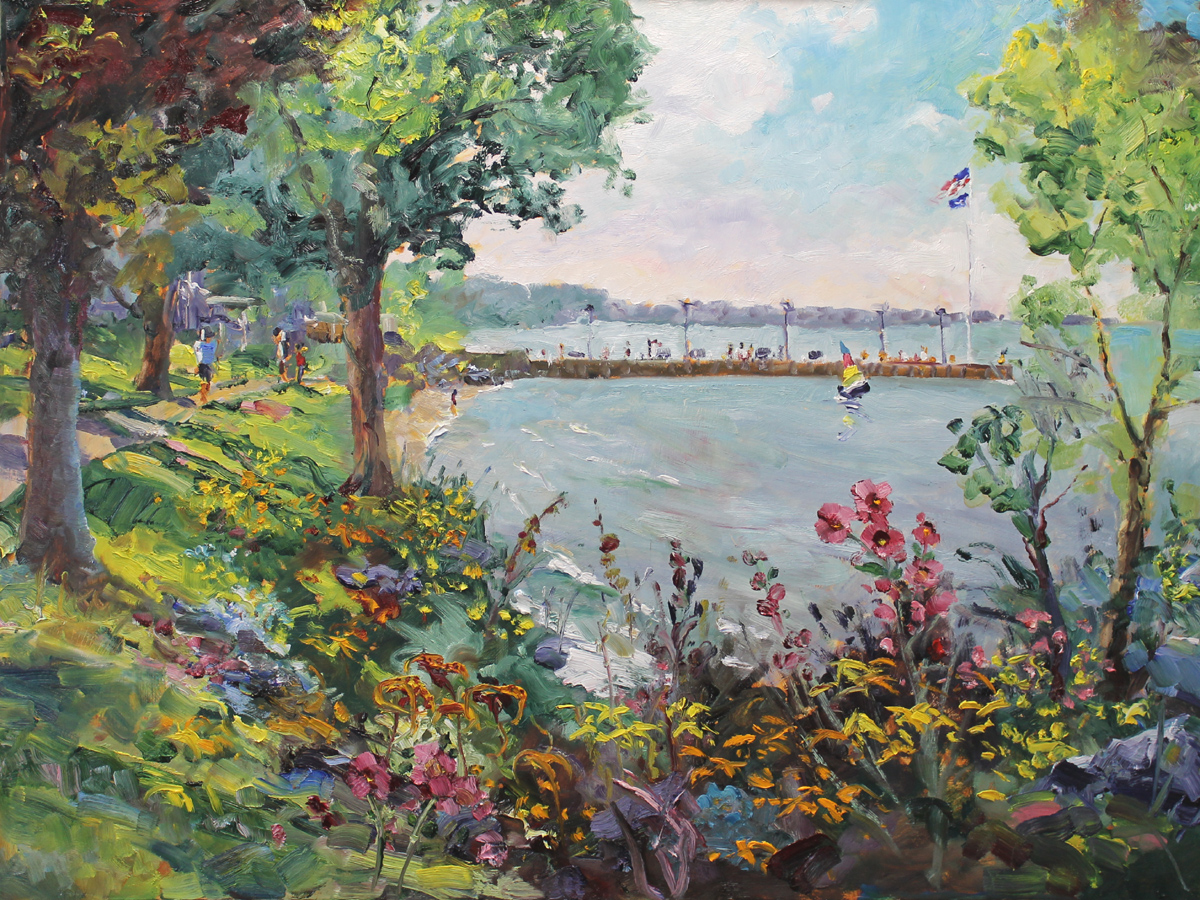 In college, he decided to major in architecture, telling me that the best parts were the art classes and drawing required for the degree. He cites his amazing instructors during this time in his life as the reason for his need to develop his talent.

After college, Dziak spent his time wearing a variety of different hats – drafted into the army during the Vietnam War, becoming a teacher, getting married and having kids – but painting was always a constant. His life was balanced between his career, his passion and his family.

When his younger sister passed away, he came to the realization that “life is too short.” Dziak disciplined his painting, scheduling out quotas for how many pieces he wanted to finish within a week. If he was satisfied with one out of 20 of them, he was happy.

During this time, Dziak found a dedicated group of painters out of Toledo, Ohio that painted together every Monday, their subjects ranging from human models to landscapes. Dziak recalls attending every single session for five years, driving over an hour one way each week to improve his craft, no matter the weather, no matter how early he had to wake up.

Not only did they help each other become better painters, but Dziak also created powerful friendships as a result. Their goals echoed one another, and brought them together. Dziak tells me that finding a group of like-minded people is crucial to where he is now, and to anyone seeking to become proficient in their craft. The comradery is encouraging and helps curb the thought of giving up.

“Hook onto others,” he advises.

At this point in our conversation, we transitioned from anecdotal to advisory. I asked him what advice he would give to an aspiring artist, and he quickly joked “find a spouse with a good job.” We shared a laugh, and he waved his hands saying he would give me a real answer.

His first piece of advice is to go to school and expose oneself to all sorts of mediums and people, referencing his college days and his teachers.

Dziak believes in perseverance. Failures are inevitable, and unless we accept them, we can never overcome them. Summing up the idea perfectly and succinctly, he says, “Every painting is just practice for the next one.”

When Dziak looks at one of his finished paintings, he analyzes it, searching for areas of improvement.

“When I look at a painting, I want it to give me energy,” he says. A viewer should feel something when they look at a painting, or it isn’t good, according to Dziak. The artist paints their energy onto the canvas, and this is what makes it beautiful.

At this point, he looked around his studio, pointing out examples of his own paintings that did and did not have energy.

Every single one of the thousands of decisions that go into a painting – the brush strokes, the colors, the composition – work together and build the energy that separates “this is nice” from speechless, he tells me.

Speaking of energy, Dziak is full of it. He’s quick-witted and a joy to talk to. Throughout my time with him, I noticed twinkles and infectious smirks when he would tell stories from his youth. It’s obvious where his art finds its energy.

Lakeside is lucky that Dziak is so inspired by its environment. His art adorns buildings all over Lakeside, in businesses and homes alike. His energy is also evident all over our community, encapsulating his inspiration and inciting it in others.