Frank Gwalthney’s Chautauqua-by-the-Sea story may sound familiar to many Lakeside stories told on a Front Porch.

Gwalthney had planned to spend the summer of 1965 painting for his high school teacher, Mr. Mitchell. His teacher invited him to go to a place he described as a “Baptist gathering place.”

Gwalthney was 18 years old and completely uninterested. Nevertheless, he agreed to come along.

Just as newcomers arrive in Lakeside for the first time, Gwalthney fell in love with Ocean Park and the accepting, welcoming environment the Chautauqua fosters.

In 1968, he took his future wife, Helen, to Ocean Park to make sure she would have the same love for the seaside retreat

By 1976, the couple had married and were moving into a newly-purchased cottage with a 6-week-old baby boy, Jonathan. Four years later, their daughter, Amy, was born in Maine during an Ocean Park summer.

Later in life, Amy followed her father’s lead and tested potential spouses by bringing them to Ocean Park. Does this sound familiar to Lakesiders?

Gwalthney remembers when his son learned to ride a tricycle at 3 years old and began delivering the mail from a shared mailbox. When Amy was of age, Jonathan taught her to deliver the mail on her tricycle, too.

Ocean Park, like Lakeside Chautauqua, gives children a greater sense of freedom. Many Lakeside parents can relate to Gwalthney, who never worried when his kids were gone for hours. He knew they were visiting with all their Ocean Park family around the block.

“My kids claim they are from Ocean Park and ‘exiled’ to New Jersey during the year.”

Ocean Park, also known as the Chautauqua-by-the-Sea, is a Chautauqua community in Maine along the Atlantic coast.

It is situated on Saco Bay, spanning more than seven miles of beach, and also houses Guild Park, a 10-acre white pine and spruce forest.

Chautauqua-by-the-Sea was founded in 1881 by Free Will Baptists as a summer retreat “for holding religious, educational and other meetings”under a Charter granted by the State of Maine.

As a fellow Chautauqua community, Ocean Park’s mission focuses on the four pillars (religion, education, cultural arts and recreation), but also emphasizes preserving the natural beauty of the seaside landscape and celebrating diversity.

Although Ocean Park and Lakeside are more than 800 miles apart, the Chautauqua principles bind the two together, providing a place for all to nurture their mind, body and spirit. 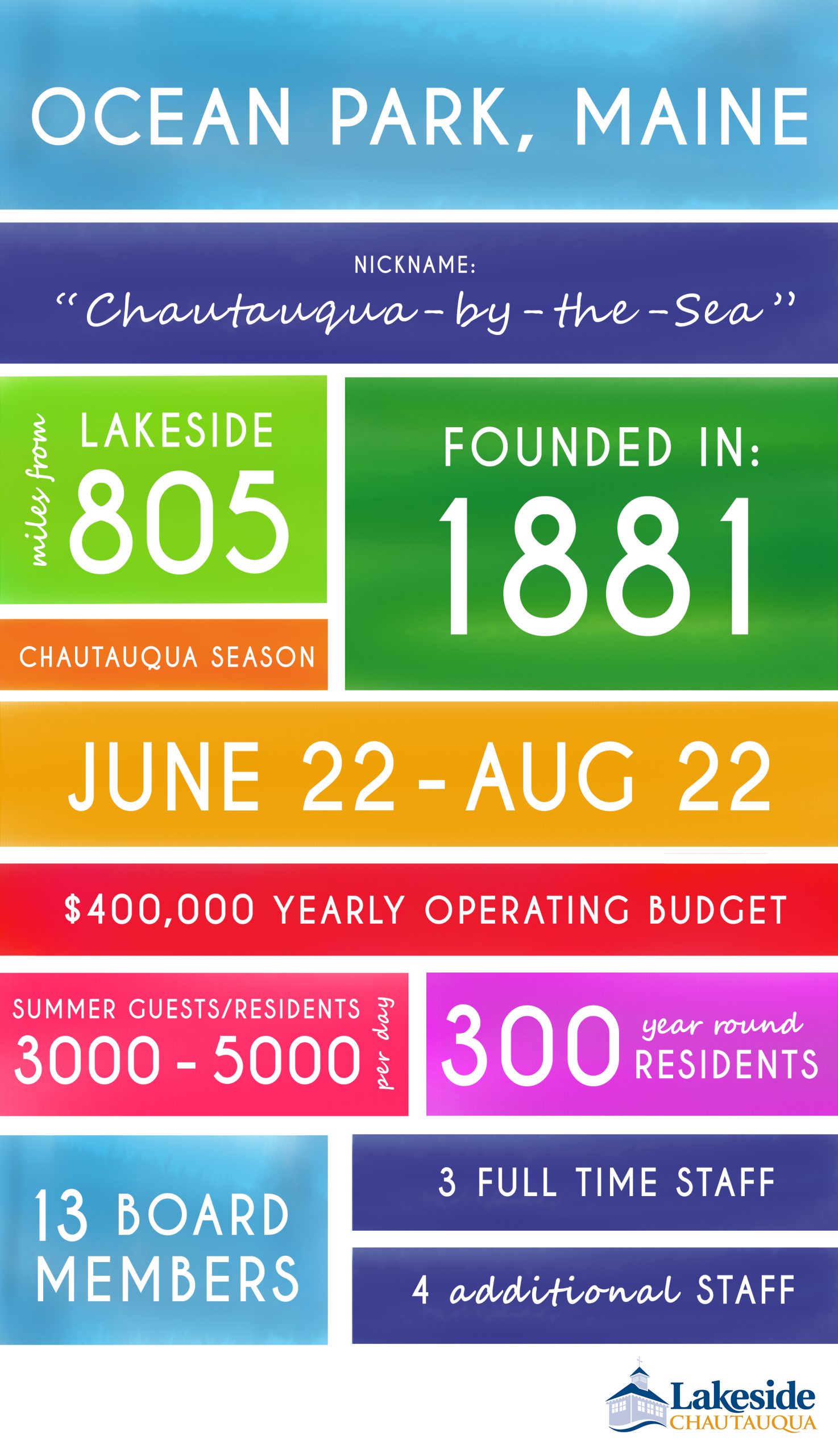 Visit www.chautauquatrail.com to learn more about Chautauqua-by-the-Sea, and explore the other communities along the Chautauqua trail.

Join the Front Porch conversation! How does your Lakeside story compare to Gwalthney’s Chautauqua story in Maine? What surprised you most about Ocean Park? What do you think is the most interesting similarity between Lakeside and Ocean Park? Tell us in the comments below.

Plans for the Steele Memorial Bandstand/Gazebo