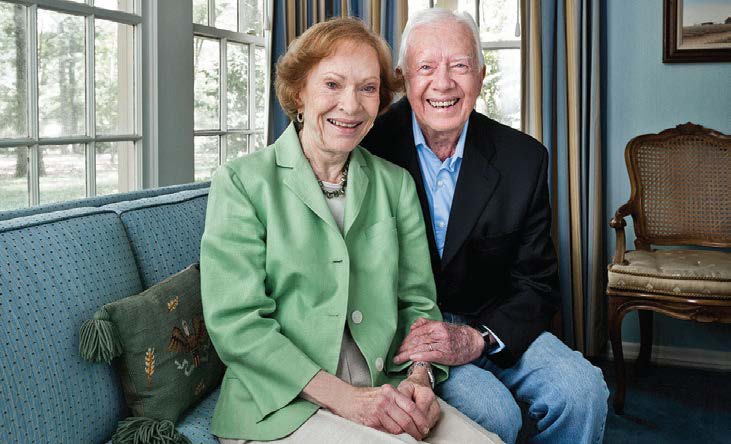 The small farming com­munity began as a one-day brief educational program that emphasized its history.

However, with the encour­agement of Rosalynn, the Plains Chautauqua programs are now generated for larger audiences with diverse top­ics.

Rosalynn was instrumen­tal in resurrect­ing the Plains Chautauqua, and President Carter served as the keynote speaker at the event.

“Chautauqua is good for our country,” ex­plained President Carter.

He added that it provides a “better picture of what our nation is and where the foun­dations for the greatness of America has been derived.”

Throughout the Plains Chautauqua program, the Carters attended various lec­tures, participated in worship services and mingled with guests.

At the opening dinner reception, Lakeside Chautauqua’s management team was honored to share a table with the Carters, providing the staff with an opportunity to discuss the historic North American Chautauqua Movement and its relevance today.

In addition to promoting the vir­tues of Chautauqua, the group dis­cussed Lakeside’s role in pioneering the movement in the 19th century. They also emphasized the importance of working together with other Chau­tauqua communities to revitalize the movement in the 21st century.

Throughout the weekend, partici­pants learned about President Carter’s childhood farm, his presidential cam­paign, The Carter Center and Miss Ju­lia Coleman, the woman instrumental in originally bringing Chautauqua to Plains, Ga.

The Carters are committed to pro­moting the Chautauqua Trail to help all Americans understand the value of places like Lakeside Chautauqua.

Plains, Ga. is a small rural town south of Atlanta with a population of more than 750 people. Visitors can learn about the community and the Carters. Individuals can tour Presi­dent Carter’s boyhood farm and the train station where the presidential campaign was organized, as well as a peanut farm.

These are exciting times for the 21st century Chautauqua Movement, and all Lakesiders are part of mak­ing history with their presence on the grounds of Lakeside.