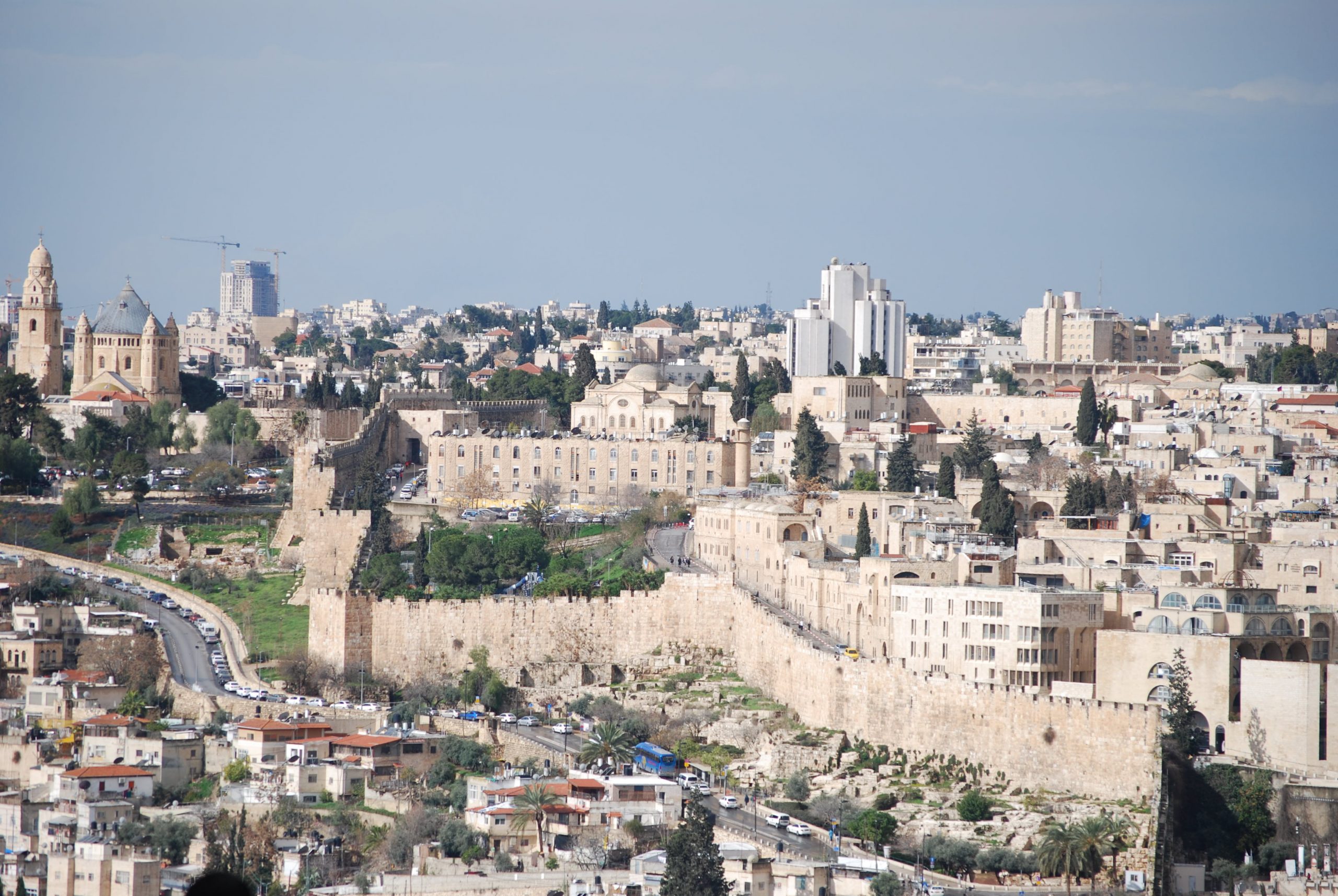 The bus dropped us off at the very top of the Mount of Olives, which is adjacent from the Old City of Jerusalem. It was cold and windy at the top, but the view was spectacular.

According to Jewish tradition, the Messiah will appear here for the Last Judgement and bring the dead back to life. The cemetery on the hillside has become the holiest and most important cemetery in Jerusalem. It is covered with thousands of grave stones.

From the hilltop, you can see the Dominus Flevit, a Roman Catholic Church that looks like a teardrop.  Across the valley, we could see Jerusalem’s Eastern Wall and the Temple Mount, a holy site to Christians, Jews and Muslims.

We began the walk down the mountain on the narrow, slippery and rocky streets to the Dominus Flevit, which means ‘the Lord wept.’ This is where Jesus visualized the destruction of Jerusalem and cried. 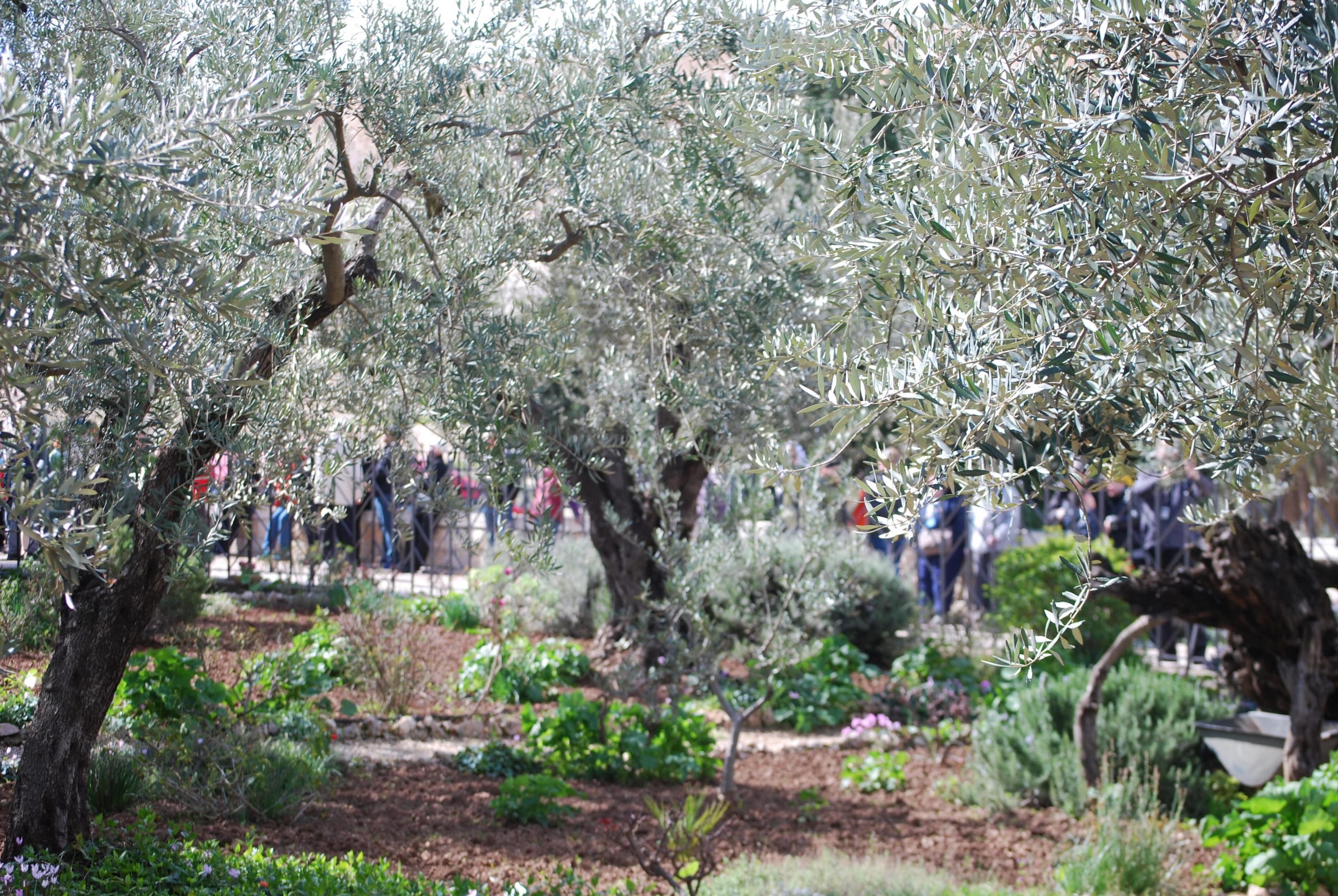 This appropriately teardrop-shaped church was created by Antonio Barluzzi, an Italian Franciscan monk and architect. He quickly became known as the ‘Architect of the Holy Land’ because he created churches at the Garden of Gethsemane, Mount Tabor, Mount of Beatitudes and many more.

The next stop would be the Garden of Gethsemane and the Catholic Franciscan church, Basilica of Agony, or the Church of All Nations. In the Garden, Jesus experienced profound and overwhelming distress and sorrow. He wept. As we stood in that same spot, you could hear the olive tree leaves ripple. Upon entering the church, there was a large painting that portrayed Jesus praying and weeping under a dark night sky.

After our tour of the Basilica of Agony, our bus took us up the winding hills to Zion and we couldn’t help to think about the hymn “Marching to Zion” by Issac Watts.

We walked through the narrow streets on the hill. We found street vendors selling falafel, breads with dates and sesame seeds, dried nuts, sesame seed snack bars and dates. The group purchased a variety of snacks from the vendors and we shared them over a short break.

In Zion, we visited the Upper Room, also known as the Cenacle, which is the traditional size of the Last Supper. It is not known exactly where the Last Supper took place, but there are little clues that indicate that the site could be near.

Just beneath this Upper Room is the honorary site of King David’s tomb, although it was closed at the time and we couldn’t visit.

We paused for lunch and headed back to Bethlehem. We had an option of shawarma and falafel in pita bread. We all thought that this was their typical fast food in this region. 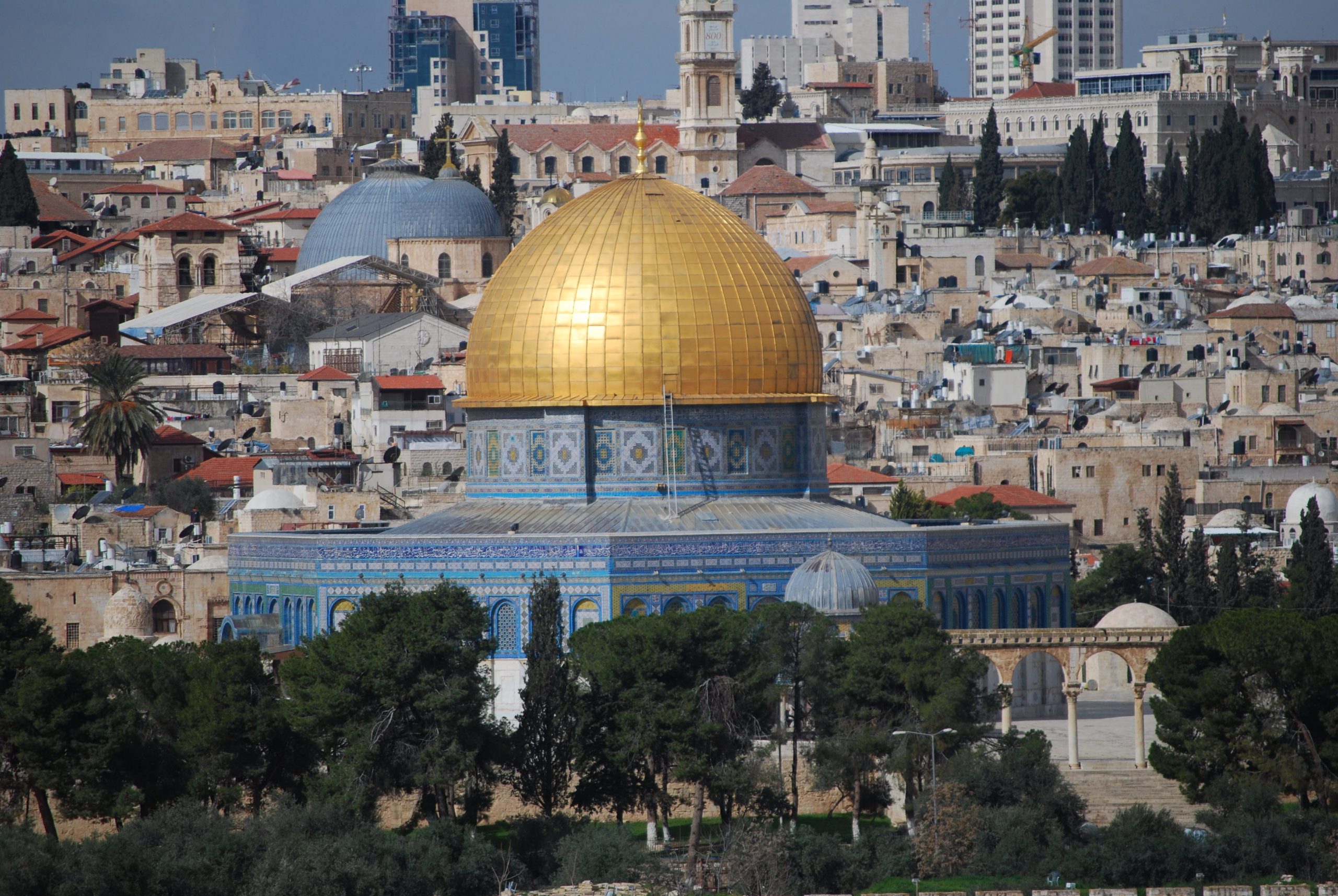 The Church of St. Peter in Gallicantu

The Church of St. Peter in Gallicantu is a Roman Catholic Church located on the eastern slope of Mount Zion. Gallicantu means ‘cock’s crow, and this church commemorates Peter’s trifold rejection of Jesus. As you approach the church today, you see a mosaic mural that depicts Jesus being lowered into the basement pit, where he was held in custody after his arrest. The colors convey sorrow and tragedy. We would soon learn what it felt like to be in the deep, dark pit.

Before you entered the church, the group walked through these magnificent bronze doors that told the story about what happened at the end of the last supper.

“Before the cock crows this day, you will deny three times that you know me.”

As you enter the church, the entire sanctuary is filled with mosaic art telling the story of Jesus’ trial. The colors are different from what we have seen in other churches: bold shades of blues, yellows, pinks and oranges.

They led Jesus away to the high priest, and all the chief priests and the elders and the scribes came together. Peter followed him at a distance into the high priest’s courtyard and was seated with the guards warming himself by the fire. The chief priests and the entire Sanhedrin kept trying to obtain testimony against Jesus in order to put him to death, but they found none.   Many gave false witness against him, but their testimony did not agree. Some took the stand and testified falsely against him, alleging, “We heard him say, I will destroy this temple made with hands, and within three days I will build another not made with hands.” Even so their testimony did not agree.

The high priest rose before the assembly and questioned Jesus, saying “Have you no answer? What are these men testifying against you?” But he was silent and answered nothing. Again the high priest asked him and said to him, “Are you the Messiah, the son of the Blessed One?” Then Jesus answered, “I am and you will see the Son of Man seated at the right hand of the Power and coming with the clouds of heaven.”

At that the high priest tore his garments and said, “What further need have we of witnesses? You have heard the blasphemy. What do you think?” They all condemned him as deserving to die. Some began to spit on him.  They blindfolded him and struck him and said to him “Prophesy!” And the guards greeted him with blows.

We began to head down the stairs to see the dark pits. The group headed outside to see the place of the Holy Stairs, which have now been relocated to Rome. There is no doubt that Jesus must have gone down this path the night before his death and he must have climbed them when he left Gethsemane.