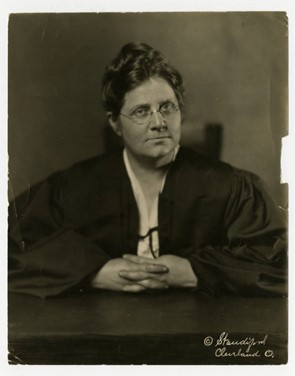 Florence Ellinwood Allen (March 23, 1884 – Sept. 12, 1966) was a 20th century leader in the field of law – a U.S. Circuit Judge of the U.S. Court of Appeals for the Sixth Circuit; the first woman to serve on a state supreme court; and one of the first two women to serve as a U.S. federal judge.

When her family moved from Utah to Ohio, Allen’s father took a post as a linguistics professor at Case Western Reserve University. Learning Greek and Latin before she was a teenager, Allen grew up in the glow of her father’s academic career at the university.

She herself graduated from Case in 1904 with bachelor’s degree in music then moved to Germany to develop her musical skills with plans to become a concert pianist. An unfortunate injury brought an end to her musical career, and Allen moved back to Ohio in 1906, where she worked as a music critic for The Plain Dealer in Cleveland.

She returned to her alma mater and graduated in 1908 with a Master of Arts in political science and began individual studies in law. Women were not admitted to the Case Western School of Law at the time, so Allen moved west for a year, studying at the University of Chicago. She transferred again to complete her Bachelor of Laws at New York University School of Law in 1913.

The following year, she was admitted to the Ohio Bar and, less than seven years later, was elected to the Ohio Supreme Court. Allen was the first woman in the nation to hold a position on a state supreme court.

She spoke at Lakeside five times between 1923-1949. At her first speaking engagement, Allen was a newly appointed Associate Justice of the Ohio Supreme Court. By the time of her last program at Lakeside, she was Judge on the U.S. Court of Appeals for the Sixth Circuit, a post which she had been appointed to by President Franklin D. Roosevelt in 1934. Her programs were all hosted by the Lakeside Federation of Women’s Clubs, the Lakeside Women’s Christian Temperance Union or the Bible Conference.

Special thanks to the Lakeside Heritage Society for providing information on Florence E. Allen and her visits to Lakeside, as well as the Ohio History Connection for their blog and picture of Allen. Lakesiders are Thankful for…