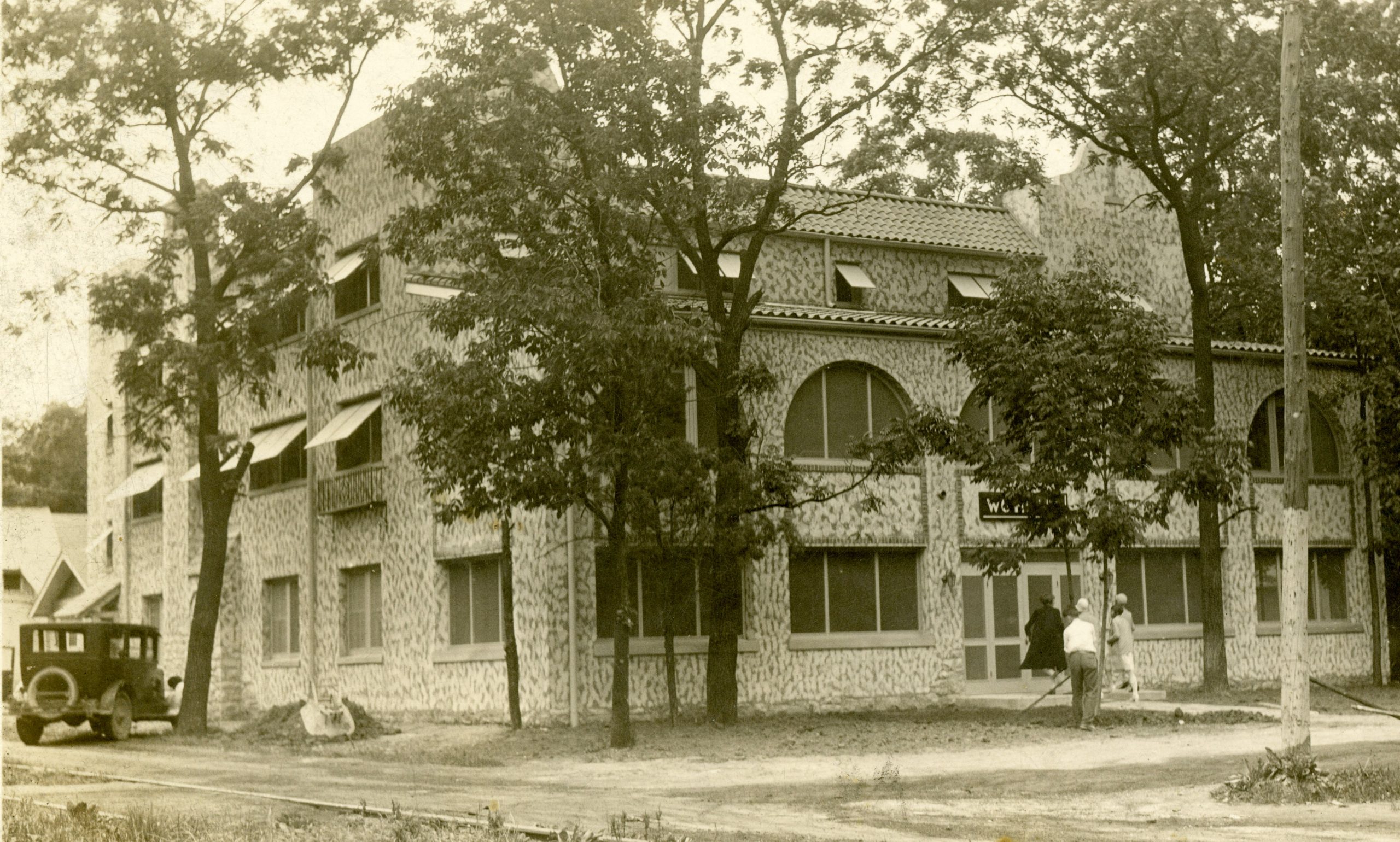 The first known School of Missions at Lakeside was held August 4-9, 1913 and led by Miss Carrie Barge, the Field Secretary of the Department of Young People’s Work in the Home Missionary Society.

The 1913 Lakeside Program identifies that Miss Barge led class work at 2 p.m. Monday through Saturday based on the WHMS interdenominational textbook titled “The New America.”

Miss Barge continued to participate as a leader and speaker during the School of Home Missions at Lakeside for nine years through 1921.

Both schools, designed for girls ages 13 to 21, presented a new study theme each year and promoted the important roles for women leaders in Christian service.

In the early years, the WHMS rented accommodations for registrants in the largest guest houses.

Needing a headquarters building in Lakeside, the WHMS purchased a board and batten cottage in 1917 on Walnut across from the Brick Store where the workers were located, literature was sold and exhibits were displayed.

In 1920, the WHMS purchased part of the adjacent lot, removed the cottage and built a three-story headquarters with open porches at the address now known as 217 Walnut Avenue.

The building, which became known as the “Carrie Barge Cottage,” transferred ownership from the WHMS to the Women’s Society of Christian Service and then to the First United Methodist Church of Cleveland in 1971.

As participation in the School of Home Missions grew, the WHMS recognized the need for a new girls’ dormitory.

In 1924 the WHMS purchased one vacant lot diagonally across Fifth Street from the Methodist Church and in 1927 purchased the adjacent lot from the Lakeside Association.

Major renovations in early 1961 removed partitions, changing the former small bedroom floor plan on the second and third levels to dormitory rooms with space for ten girls each and enlarging the restrooms.

Due to rising costs of operating Wo-Ho-Mis, the building was donated to the Lakeside Association in 1970.

Another major renovation in early 1999, which finally replaced the screens and wooden shutters with windows, was possible through a bequest from Eleanor and Margaret McKay whose family were Lakersiders for six generations.

Thousands of young people have stayed in Wo-Ho-Mis Lodge over the past 77 years while participating in various Christian conferences.

And what became of the Carrie Barge Cottage at 271 Walnut Avenue, the School of Home Missions headquarters?

After many years housing various businesses on the main level and rental accommodations above, this building was purchased in January 2014 by the Lakeside Association to serve as offices for the Lakeside Foundation and Marketing Services. It is now known as the Legacy House. Bettinger Park, the ‘Heartbeat of Lakeside’ for the Browning Family