History of the Lakeside Pavilion 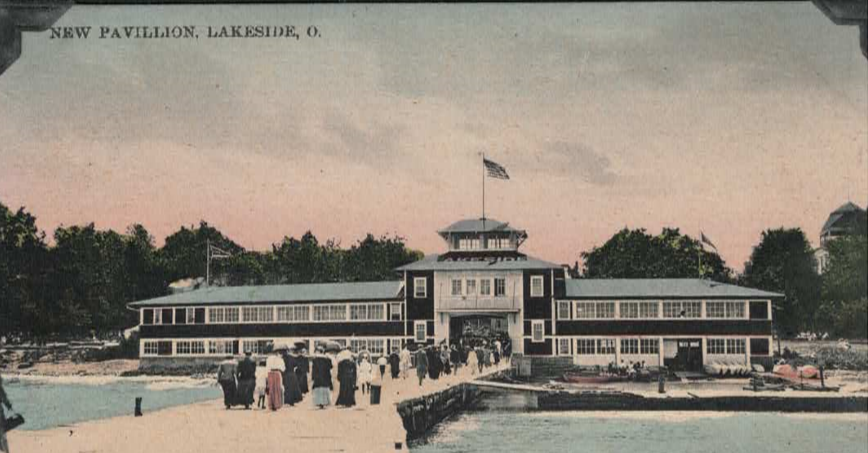 Serving as a symbol of the community for 110 years, the Pavilion is easily the most recognized landmark in Lakeside Chautauqua. Although the building has endured many phases and facades overtime, the Pavilion has remained an integral part of the Lakeside experience.

1909 Pavilion
Built in 1909, the original Pavilion served as the first large-scale entrance to Lakeside. Two well-known builders, G. “Bert” Pettibone and Fred Dankelsfen, were awarded the contract to construct the building for $4,724. 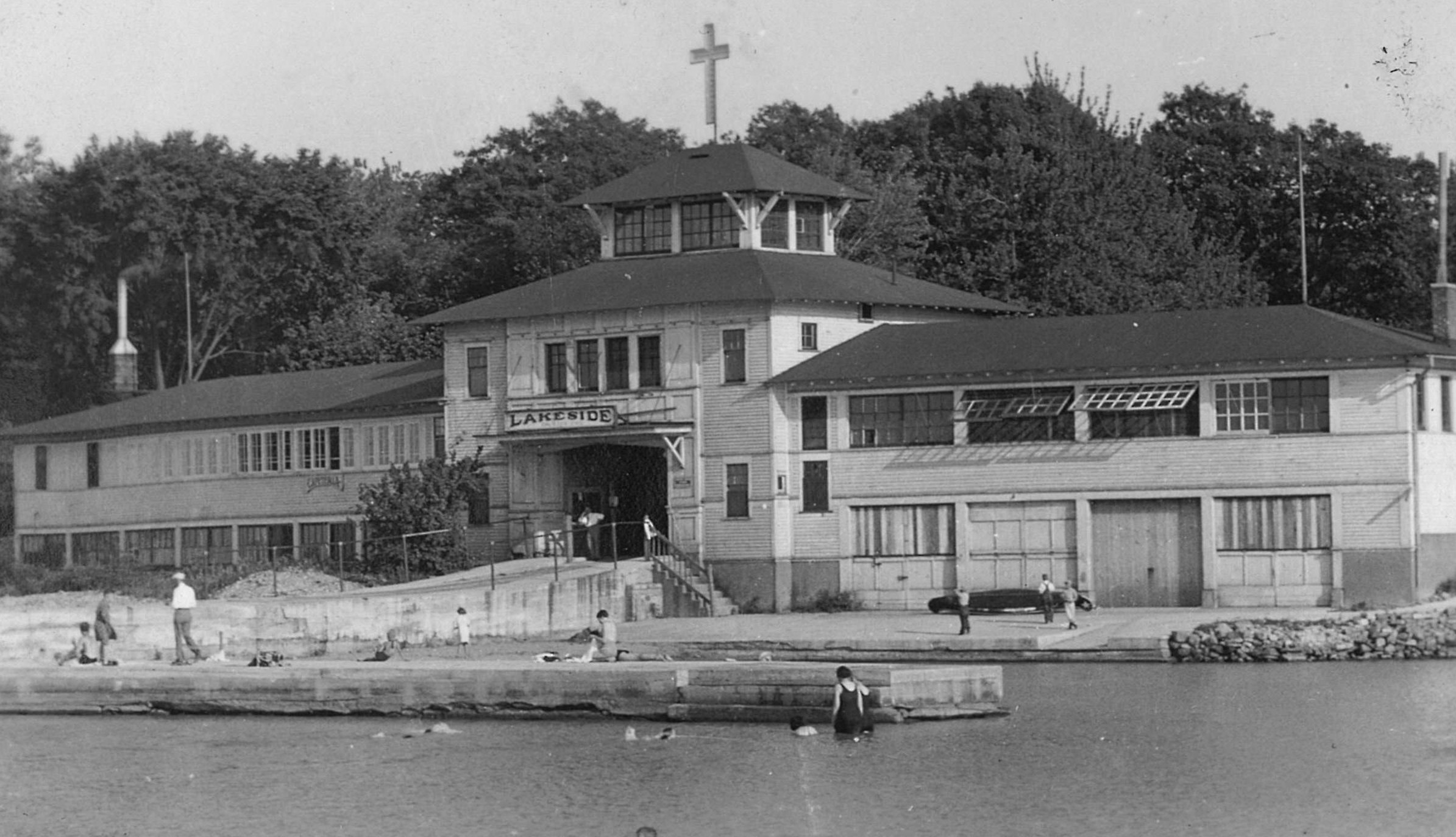 Complete with a cafeteria, telegraph office and boat rental office, it quickly became the premier gathering place for Lakesiders young and old. The Pavilion flourished as the hub of the community, with later additions of a bowling alley, barbershop, drug store, soda fountain, penny arcade, band stand and souvenir shops.

As the Chautauqua community grew exponentially over the next four decades, fewer guests arrived by boat, and the use of the Pavilion evolved. The Lakeside & Marblehead Railroad Depot, the Interurban Station on Fifth Street, and new automobile entrances became the official gateways to Lakeside, while the Pavilion remained the social center of the town.

Pavilion operations declined further during the difficult days of World War II, until finally, after years of lakefront weathering, a new structure was necessary. 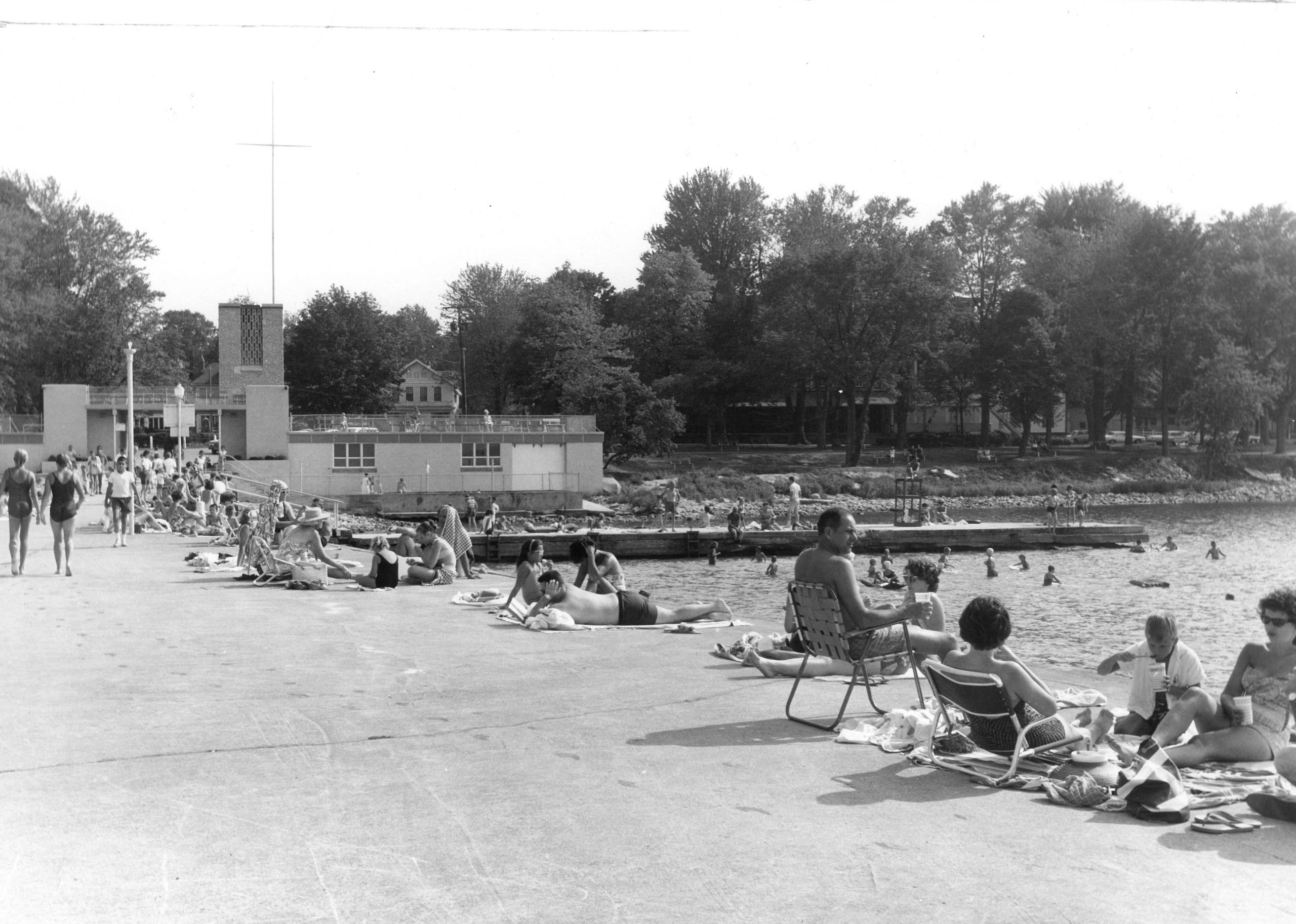 1962 Pavilion
After tearing down the original Pavilion in the fall of 1961, a push was made to build a future-focused structure that opened visibility to the waterline. However, despite the conscientious efforts of the builders, the second Pavilion, dedicated on August 8, 1962, was met with mixed reviews.

Though the magnificent steel cross atop the John Q. Shunk Bell Tower became a new signature shoreline monument, many people regretted the loss of the original Pavilion, feeling that the structure had lost its old-time charm.

Constructed from stone and cement block, the second Pavilion was also damaged from the wear and tear of Lake Erie and frequent use. Open decks designed for sunbathing were damaged and blocked off in less than five years. The community began to wonder if the building could be remodeled to its former historic glory.

After a generous gift to the Pavilion project in 1984 by fourth-generation Lakesiders Mr. and Mrs. Joe S. Edwards, preliminary plans were developed to construct a new Pavilion that would mirror the style of the original structure. The donation was part of a larger “Lakeside…May It Live Forever” capital improvements campaign that ran through the 1990s. 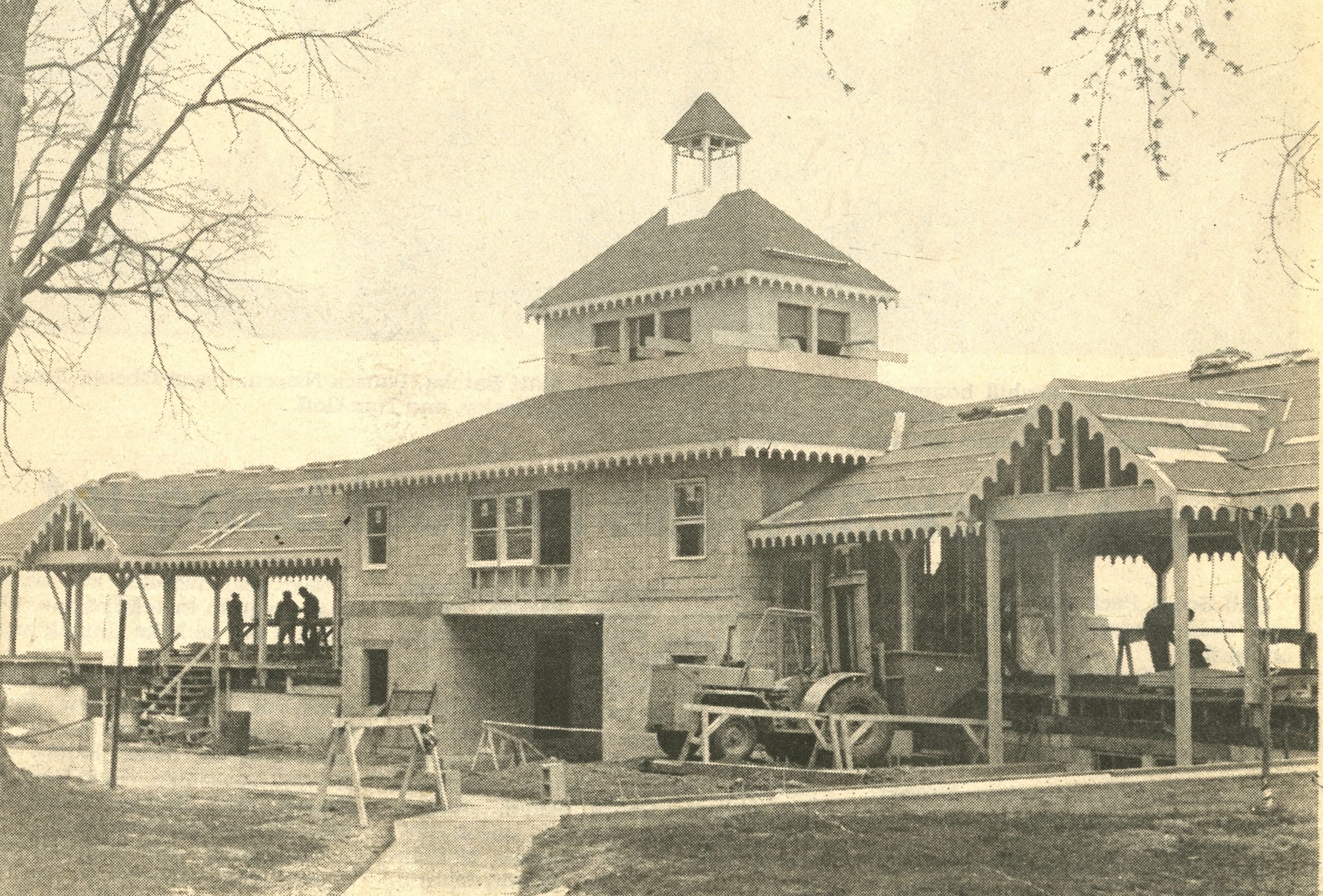 1988 Pavilion
When building the present-day Pavilion, architects Bauer, Stark and Lashbrook of Toledo combined gingerbread trim with a new open-air concept to be carried out by the Focht Construction Company of Port Clinton. Construction began in 1988, and the dedication and opening of the Pavilion occurred that summer.

In true Lakeside fashion, the present-day Pavilion was designed to pay homage to our history while providing modern amenities.

Preserve the Tradition & Participate in #GivingTuesday
Only receiving minor repairs over the last 31 years, your support as a community on #GivingTuesday (Dec. 3) will help raise money to update the Pavilion with the following:

Give on (or before) #GivingTuesday Dec. 3 to preserve the tradition of the Lakeside Pavilion. Donate online at lakesideohio.com/givingtuesday, by phone at (419) 798-4461, ext. 246, in person at the Lakeside Chautauqua Foundation Office, or by mail by sending checks to 236 Walnut Ave., Lakeside, Ohio 43440, with “Pavilion Project” in the memo line.

Your support will make an impact on the lives of Lakesiders for generations to come. Thank you for making a difference!

Special thanks to the Lakeside Heritage Society Archives for providing the history and pictures. The Lakeside Daisy, an Ohio Treasure