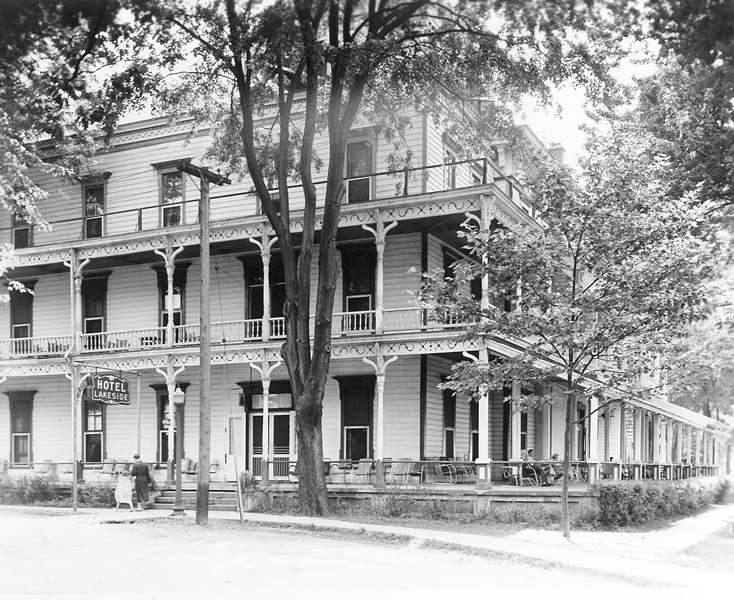 Hotel Lakeside, a notable National Historic Landmark, will celebrate its 140th Anniversary this summer. Lakesiders are invited to a Birthday Celebration on the Hotel Lakeside lawn from 1:15-1:30 p.m. Sunday, Aug. 2 during Heritage Day.

Built in 1875 during the beginning of the Chautauqua Movement, the historic Hotel Lakeside sits stoically along the Lake Erie shore, a one-of-a-kind edifice representing the architecture and history of another era.

Throughout the years, the hotel has provided accommodations for many famous guests, including President William McKinley, Rutherford B. Hayes, First Lady Eleanor Roosevelt and Amelia Earhart.

The original Hotel Lakeside was built in 1875 for $14,000 and included the west wing and dining room. In 1879, an annex was built with an additional 60 rooms, but it was not until 1890 that the two structures were connected.

When the hotel first opened, its staff consisted of 40 people. The rooms were furnished with beds, desks, pitcher and bowl sets, dressers and marble top washstands. However, the hotel had no running water or electricity. A two-story outhouse for guests was located in the present courtyard.

During the 1800s, guests could stay at Hotel Lakeside for $10 per week, which included room and board, or enjoy a single meal for 50 cents. The annex had separate room rates, costing $3 per week or 60 cents per day.

Since its construction, Hotel Lakeside has undergone a variety of renovations and upgrades, including electric lights, public baths and restrooms.

In 1914, the front porch was enlarged and a concrete floor was installed, along with a fireplace in the lobby. Sinks were installed in every hotel room in 1930. In 1964, the hotel’s annex was torn down, and the currently-standing east Maple Avenue Wing was built in its place.

It was not until 1955 that Lakeside took over management of the hotel. They updated the lobby and rooms with new wallpaper, rugs, mattresses and plumbing.

However, in the years following, Hotel Lakeside was poorly maintained. Lakeside’s Board of Trustees decided to tear down the structure and replace it with a motel or restaurant. Financing of the demolition and new construction never materialized, and by 1973, more than half of the rooms were unusable.

By August 1974, a group of dedicated Lakesiders, known as The Friends of Hotel Lakeside, stepped forward in an effort to save and restore the historic building. Lakeside’s Board of Trustees later changed course and resolved to save and preserve the hotel.

For more than 40 years, The Friends of Hotel Lakeside were dedicated to preserving and upgrading the facility. The original 25 members of The Friends conducted massive renovations in 1975, 100 years following the hotel’s establishment.

The most important improvements since then have included complete rewiring, partial new plumbing, installation of a sprinkler system and elevator, new kitchen, foundation repair and restoration, renovation of the dining room, addition of the Barbara Lane Memorial Suite, and air conditioning of the dining room, lobby and all of the guest rooms.

Without the combined effort and cooperation of The Friends, Lakeside staff and Board of Trustees, the Hotel Lakeside would not be celebrating 140 years in the Chautauqua community.

Today, the hotel is still reminiscent of the Victorian era, featuring original and antique furnishings and a beautiful wrap-around porch showcasing the best views of the islands.

Hotel Lakeside is open to guests seasonally from Memorial Day weekend through September. Guests can make a reservation online at http://www.lakesideohio.com/accommodations or by phone at (866) 952-5374, ext. 230.