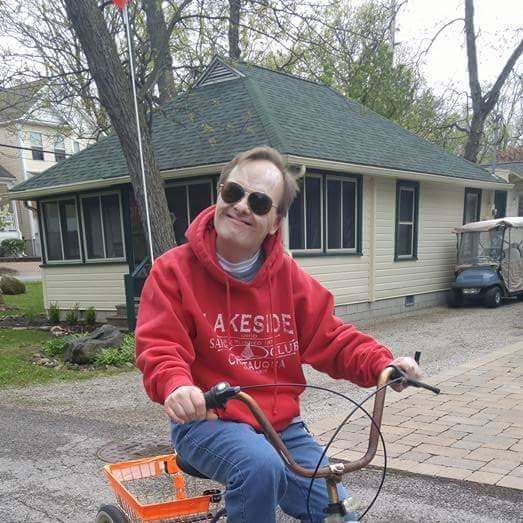 Whether they knew him as the Mayor of Lakeside, the happy man on the three-wheeled bike or the man with the clipboard; the patriotic dock singer, the leader of God Squad’s children’s procession, or the doorman at the Kite Shop, everyone knew Les Cunningham.

Les was a joyful, bossy, faithful Lakesider for three decades before he passed on Dec. 17, 2017. Living to the age of 57, Les far exceeded the expected lifespan for a person with Down syndrome. Pat Castanaras, Les’ older sister, largely credits his longevity to the benefits of Lakeside.

“Les would never have been the person he was if it hadn’t been for Lakeside,” said Castanaras. “The level of freedom he had here was instrumental in allowing him to reach his full potential. And along with that, Les taught people not to be afraid of those with disabilities. He inspired people to be kind and to express themselves.”

Les first came to Lakeside in 1987 with his parents, Leslee and Pearle Cunningham. Leslee had accepted the position as Lakeside’s Officer of Development, the position now referred to as the Vice President of Advancement & Communication. Lakeside’s safe, familial nature allowed Les to blossom and express himself.

“Les was kind to everyone he met,” said Castanaras. “He lived by the fact that everybody is good, nobody is bad and he never wavered from it. He encompasses the spirit of Lakeside.”

Les was a religious man who knew that children were Lakeside’s future, so he cherished leading the children’s procession in church for God Squad. He also enjoyed leading the procession because he enjoyed having leadership roles.

Les worked at The Workshop Inc., a non-profit that provides income opportunities for individuals with disabilities, where he packaged and assembled various products. He became a production manager and a tour guide for the facility. Here in Lakeside, he also helped at Hoover shows and at worship service, doing tasks such as making sure that ushers had enough programs and that all of the candles were lit.

Les liked having roles so much, that sometimes he would create positions. For example, on Saturdays, blank clipboard in hand, Les took it upon himself to go to each department to make sure that everyone was in attendance and doing their job.

Les also took it upon himself to be the dockside musician. Every Saturday afternoon, Les would go to the dock and sing. Les was always laughing, chatting, and sharing his happiness with others.

“Les looked at the world through rose-colored lenses,” said Castanaras.

One of Les’ favorite traditions at Lakeside was a family tradition he shared with his sisters, Castanaras and Carolyn Beears. Every Tuesday, the trio celebrated what they referred to as ‘Sisters’ Day.’ First, they would eat dinner at the Patio. Then they would play shuffleboard and get ice cream. The loser from shuffleboard was the one who bought the group’s ice cream.

Join us on Tuesday, July 24 to celebrate Les’ life during Lakeside’s Day of Caring. Express love, gratitude, and compassion to those in your families and in your community. Lakeside is currently arranging music, an evening modeled after ‘Sisters’ Day,’ a community picnic dinner, shuffleboard, miniature golf and ice cream.