Lakeside is honored to be featured in the latest edition of Lake Erie Living. Lake Erie Living magazine is the only lifestyle publication for the entire Lake Erie region – Michigan, Ohio, Pennsylvania, New York and southern Ontario Canada. This coffee-table worthy magazines celebrates the people, places and activities that make Lake Erie so unique.

Lakesiders can read the complete article, “More on the Shore,” written by Lynne Thompson below and on the Lake Erie Living website.

More on the Shore 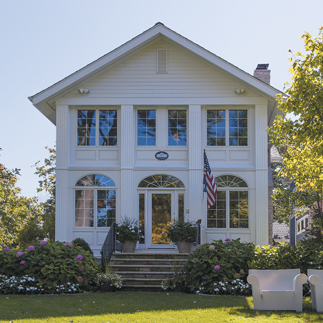 Bill and Mame Drackett didn’t think twice about purchasing the house next to their own getaway in Ohio’s Lakeside Chautauqua community. The early-20th century structure, christened “that White House” by generations of visitors to the gated resort, was one of those homes people photograph and artists paint, a lovely Western Reserve-style residence on the Lake Erie shore. The couple, owners of a Cincinnati-based real-estate development and management company, saw the five-bedroom, two-bath abode as the perfect place to accommodate a constant stream of guests.

Moreover, the Dracketts shared a real-estate history with the owner’s ancestors. When the cottage between their two properties fell into disrepair during the Great Depression, the two families purchased and demolished it, then turned the lot into a large shared side yard — a rare amenity in a town where the buildings are so close together that two houses actually share a rain gutter.

“It just made a natural addition,” Bill says.

The couple knew the stately abode was a century cottage at heart, with no heat or air conditioning and dark-stained beadboard on the walls of every room. “With the house freezing during the winter, you couldn’t have drywall or plaster because of the moisture,” Bill explains. But they weren’t fazed by its condition. Bill had renovated their own cottage, built by his grandfather in 1904. The couple embarked on a mission to transform Lakeside’s White House into a showplace worthy of a name shared with 1600 Pennsylvania Ave. in Washington, D.C. – a fact noted on the front of the home by a replica of the White House plaque seen behind presidents at press conferences.

The couple had three goals: Turn the house into a year-round retreat, retain a measure of its original modest character and create inviting interiors. “It was just so dark before,” Mame says. “I went the total opposite just to give it light.” 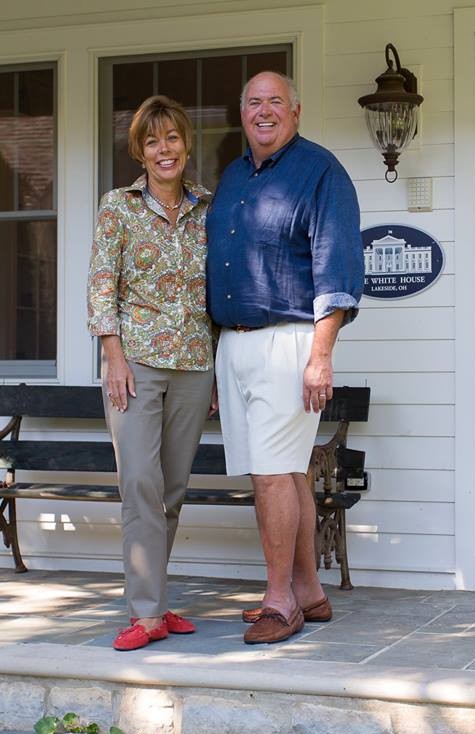 The Dracketts began their renovation by hiring Bellevue-based Zimmerman Remodeling and Construction to demolish a back addition and move the original structure into the side yard so contractors could build a basement. It boasts a game room with a native-limestone fireplace and high-end pine woodwork, full bath with a tumbled-marble double shower and granite countertops, bedroom with crazy quilts and an antique walnut chest, and a laundry room with two stackable washer/dryers. Even the concrete floor is stained and scored to look like bluestone. But it is the trio of windows in the game room that truly upgrades the space from finished basement to lower level.

“Because of the slope of the lot, the front of the house was elevated enough so we were able to … bring the windows so that they’re eye-level and get the natural light in,” Bill says.

Once the house was on its new foundation, builders replaced the back addition with a two-story counterpart consisting of a downstairs family room and upstairs master bedroom. Workers also began removing walls throughout the first floor, including the original exterior wall between the living room and enclosed front porch. “From the interior of the first floor, you could not see the lake,” Mame says. The remaining beadboard was replaced with drywall, the damaged white-pine floors with honey-stained hickory.

While the living and dining rooms retained their original footprints, the Dracketts opted to extend the galley kitchen into a neighboring bedroom. The space, finished with glazed cream-colored cabinetry, Tropicana Gold granite countertops and a tumbled-marble backsplash, boasts a large triangular island with vegetable sink and raised bar, two ovens, a side-by-side refrigerator/freezer and six refrigerator drawers. The space doubles as a caterer’s kitchen.

“We do a lot of events in the side yard,” Mame says. “If I can keep the cooking over here, I do, just to keep it out of our house.” French doors installed in the now-open dining room provide easy access to the green space.

Mame finished the first floor with a mix of antiques and comfortable seating in a palette inspired by the sun, sky and water. The family room was painted butter yellow and furnished with a pair of rolled-arm chairs in a rusty red seersucker, a rolled-arm sofa in a yellow-, green- and rusty red plaid, and a white beadboard entertainment center. The wall color extends into the dining area, where a 19th-century wake table, once used to display caskets at home funerals, dwarfs a miniature corner cupboard displaying child-size soft-paste tea sets produced during the 1800s.

In the pale-blue living room, a rolled-arm sofa upholstered in a blue-striped cream damask holds court in front of the polished-limestone fireplace with a couple of occasional chairs cushioned in a yellow oak-leaf print, an antique birdcage Mame turned into a two-story fairy garden, and a green wooden chest emblazoned with the words “H.M.S. Dover” that an antique-dealer friend picked up during a trip to England. Although the Dracketts are dedicated sailors, nautical motifs and accessories are limited. For example, the paintings on the walls, a number by nationally known artist Rick Dziak, feature views of the house and lake instead of the wooden boats they love so much.

“Anything with a nautical aspect, we like in here,” Mame says. “But we don’t like to overdo.”

Upstairs, contractors removed a wall between a narrow sleeping porch and two impossibly tiny bedrooms at the front of the house to make a pair of functional spaces. Mame chose a light taupe paint for one room, a neutral that contrasts nicely with the bold scarlet floral spreads on the antique wrought-iron twin beds, and a pretty periwinkle for the other, with the same shade of blue in the quilts on the white Jenny Lind twin beds. The wall separating the two rooms was finished with white beadboard on each side, creating an accent with texture as well as color. The Dracketts employed a similar technique in an existing bedroom across the hall, where decorative board-and-batten construction distinguishes one of the walls, all painted a pale blush — a color that dominates the washed-out rose-print cotton spread and table skirt, both edged in heavy cream fringe.

While the upstairs bath also survived to be remodeled, a small bedroom at the back of the house was turned into a hallway to and bath for the new master bedroom. The space is unexpectedly feminine, with pink walls under a white beadboard ceiling and a pink toile print on the bed, chair cushions and window seat — a storage feature added to almost every room in the house.

“I like pink,” Mame explains. “Our bedroom next door is pink, too.”

But the biggest surprise is the staircase, a main attraction thanks to its star-spangled blue runner, a playful choice inspired by the house’s name. Visitors stop at the top step to check out an artist’s rendering of the Washington Monument as seen from the Truman Balcony of the White House. The print was framed, matted and signed by then-President George Bush and his wife as a 2008 Christmas greeting.

Improvements weren’t limited to the interiors. French doors in the family room open to reveal a Pennsylvania bluestone patio complete with an outdoor fireplace constructed of native limestone and dolomite. “A lot of s’mores are consumed out here,” Mame says as she sits down on a sofa next to Bill. Unlike most patios, this one is located in a far corner of the lot instead of right next to the house.

“We didn’t want to lose the lawn,” Mame explains as she gazes at the narrow strip of well-manicured grass between the dwelling and outdoor room.

The Dracketts’ renovated White House has hosted VIPs such as the Von Trapp Family Singers (Werner von Trapp’s son and grandchildren) and Melissa Manchester; the entertainers stayed at the home during their respective stops at Lakeside to perform there.

“Melissa Manchester wrote a song about Lakeside on the front steps while she was here and sang it that night at the show,” Bill remembers.

But the visitors who fill the house from May to October are generally friends and family, including sons Chasen and Jonathan as well as Jonathan’s wife and their year-old son. “We’ve done many reunions with high-school buddies of Bill’s and college friends of mine,” Mame says. Having two neighboring addresses allows the couple to separate guests according to their sleeping schedules, marital status and ages of their children. The location also puts relatives within steps of homes owned by Mame’s mother, Bill’s sister-in-law and a number of his cousins.

“We really have a great family compound here,” Mame enthuses.

#GivingTuesday is back at Lakeside