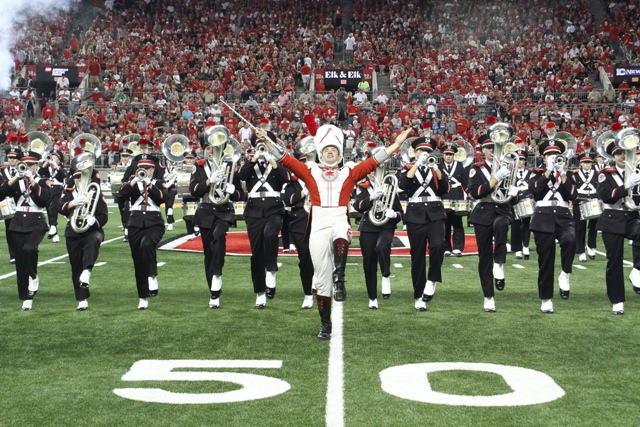 The Ohio State University (OSU) Marching Band will perform a ‘sit down’ concert at 8 p.m. Friday, Nov. 7 in Hoover Auditorium while en route to the OSU vs. Michigan State game on Saturday, Nov. 8. Doors to the concert will open at 7:15 p.m.

The concert, organized by the OSU Alumni Band-Ottawa County Chapter, is a fundraiser to provide student scholarships.

Tickets will also be sold at Bassett’s Market in Port Clinton, Ohio and Mutach’s Market in Marblehead, Ohio starting on Monday, Oct. 6.

Volunteers are needed to assist at this event. To volunteer, contact  the Communications Coordinator at communications@lakesideohio.com or call (419) 798-4461, ext. 367.

The OSU Marching Band performs at all OSU football games, and other events, during the fall semester. It is one of the few all-brass and percussion bands in the country, perhaps the largest of its type in the world.

The band had humble beginnings. The first instrumental musical organization on campus was a 12-piece fife and drum corps organized in 1778. A 16-piece band performed for the commencement ceremony of 1879.

Since 1976, the band’s membership has held steady at 225 marching members. The instrumentation is unique among college bands, patterned after the traditional British military brass band.

The block band seen at every game consists of 192 members. The other 33 members are alternates. The alternates are members of the band who challenge the regular members every week for a spot in the game day band.

Many marching band innovations were first tried and developed at Ohio State. Among them are floating and animated formations, measured step marching, script writing and the fast cadence with a high knee lift. Brass instruments, especially designed for marching bands, were also first used at Ohio State.

The school fight songs, “Buckeye Battle Cry” and “Across the Field,” were first performed in the early 1900s. Others such as “Hang On Sloopy” have become modern traditions. “Script Ohio,” the trademark of the OSU Marching Band, is considered by many to be the most memorable tradition in college band history.

Faithful Buckeye fans come from near and far to see and hear “The Pride of the Buckeyes.” All are invited to Hoover Auditorium in November the OSU Marching Band play.

What program at the Pavilion has transformed your life?