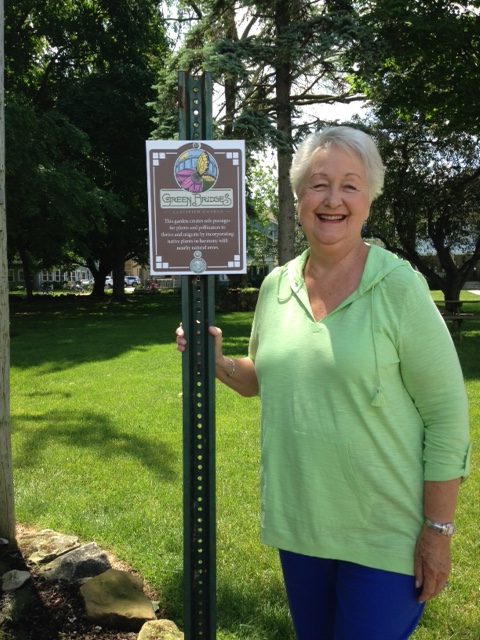 Jan Hilty has been a Lakesider since she was a kid, participating in church camps and visiting her great aunt and uncle’s cottage with her family.

After a few years of hiatus from Lakeside, she came back with her husband for a wedding. Already on the search for a summer getaway, the rediscovery of Lakeside was just what they needed.

Not long afterwards, they purchased a cottage on Cherry Avenue. Sixteen years later, Hilty is not only happy, but thriving, just like the garden she tends to near the Pavilion.

“I became a Master Gardener through the Ohio State University in 2007 for Delaware County,” she says. “While I was primarily self-taught, I received a lot of education through my involvement with the two units of the Herb Society of America.”

Hilty’s specialty is herbs and using the knowledge she taught herself, she started the Lakeside Herb Garden in 2007. Recalling those first days tending to the garden, she also tells me about the Herb Study Program, which she coordinated herself for a number of years.

As her herb garden grew, so did the students. It became difficult to host all the eager learners, let alone teach. The circle of benches they called a classroom near the Pavilion was noisy, and while it is beautiful, it wasn’t conducive to the learning they sought. If that wasn’t enough, Hilty began to struggle to keep up with lesson plans.

At this point, Hilty tells me that she was responsible for 10 weeks of programming for the Herb Study, making it difficult for her to enjoy Lakeside’s other pleasures.

Luckily, these problems found solutions. When the Train Station was repaired, the green thumbed gals and guys realized it would be the perfect location for their classes. It has an outdoor patio for hands on learning and is secluded enough that they aren’t interrupted by the bustling of Lakeside.

More than that, the students eventually became the teachers. Hilty taught and nurtured their intellects to the point that students were, and are, able to lead their own classes. Responsibility was significantly lightened for her and she is able to balance her passions with her leisure. It seems Lakeside had a plan in mind for Hilty.

After researching the Green Bridges Initiative, Hilty found the requirements on www.herbsociety.org as follows:

As it turned out, Hilty already qualified for the award. She has always used natural mulch, purchased organic plants from a local vendor and never used chemicals in her gardening.

Hilty then told me how excited she is, not only to have the award, but to publicize it – not for her own fame though. Hilty has a passion for gardening and hopes that this article will serve as encouragement for other Lakesiders to apply for the certification.

It fits in line perfectly with movements in Lakeside similar to the Pool & Wellness Campaign. The idea behind the Green Bridges Initiative is positive not only for Lakeside, but the Earth as a whole.

She harbors a great love for nature as well. Hilty succinctly and sublimely describes seeing springtime blooms as “a breath of spring.” She sees the “gorgeous greens and all the textures” at this time of year as the most rewarding part, but admits it’s not easy to pick one. Even weeding and planting are a pleasure to her.

Hilty, who likes to stay clean, loves “every bit but watering” she says with a laugh.

Congratulations to Hilty and her volunteers for their hard work, and thanks to her for planting her knowledge and passion with us here at Lakeside.