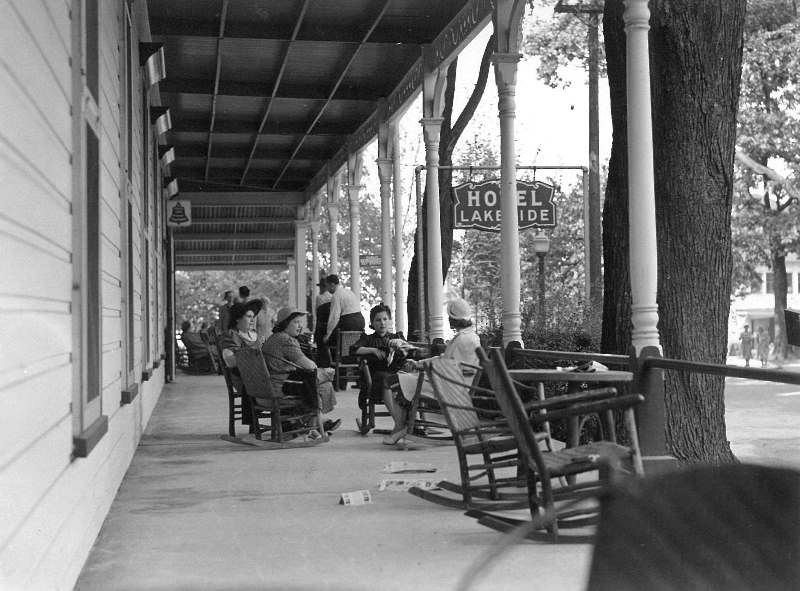 Admission to Heritage Day is open to all; however, tickets will be sold to participate in individual activities and booths if interested.

A variety of activity and old-fashioned snack booths will line the Hotel Lakeside lawn from 1:30-4 p.m. To participate in each activity or receive an old-fashioned snack, purchase tickets for $1 from 12-3:30 p.m. in Pavilion Circle and exchange them at each booth. The Lakeside Heritage Society has sponsored booths that will offer several vintage souvenirs to attendees.

Crayons & Crafts – no ticket needed
The word “crayon” referred to a pencil or stick of colored chalk before the wax crayon was invented. One of the earliest manufacturers of wax crayons was the American Crayon Company in Sandusky, Ohio, in 1902. At this activity booth, children will color a “Happy Birthday, Hotel Lakeside” page.

Fairy Floss – 1 ticket
Machine-spun cotton candy was invited by John C. Wharton and William Morrison in 1897. Morrison was a dentist from Tennessee. Cotton candy was introduced at the 1904 World’s Fair, held in St. Louis, Mo., and went by the name “fairy floss.” At this booth, ticket holders will receive a bag of fairy floss.

Popcorn – 1 ticket
Due to its low-cost, popcorn became very popular during the Great Depression, and popcorn companies thrived during this time. Charles Cretors, a native of Lebanon, Ohio, is credited with inventing the first steam-powered popcorn cart during the late 1880s. At this booth, ticket holders will receive a bag of popcorn.

Ice Cream Cone – 1 ticket
The first recipe for an ice cream cone can be found in Mrs. A. B. Marshall’s Book of Cookery, published in 1888. The ice cream cone became popular in the U.S. at the 1904 World’s Fair held in St. Louis, Mo. At this booth, ticket holders will receive a waffle cone filled with either strawberry or vanilla ice cream.

Train Whistle – 2 tickets
The first steam-powered train whistle, originally known as a “steam trumpet,” was invented in 1832 by a musical instrument builder. In North America, a succession of short whistle sounds indicates an emergency or persons or livestock on the railroad track. At this booth, hosted by the Lakeside Heritage Society, ticket holders will receive a train whistle.

Family Collage Activity & Cameras – 2 tickets
Alexander Wolcott opened the first known photography studio, called a “daguerran parlor,” in 1840. The first Kodak camera, which pioneered the use of photographic film, went on sale in 1888. At this booth, hosted by the Lakeside Heritage Society, ticket holders will have an opportunity to create a family collage.

Postcards – 1 ticket
The study of postcards is called deltiology. The first postcard sent in the U.S. was mailed in December 1848. At this booth, hosted by the Lakeside Heritage Society, ticket holders will receive a vintage postcard.

Horse Drawn Carriage Rides – 2 tickets
The horse drawn carriage era lasted more than 300 years, from the late 17th century until the early 20th century. For much of that time, only the very wealthy could afford to maintain and own their carriage. In the U.S., the height of the carriage era lasted from 1850-1910. Horse Drawn Carriage Rides will take guests through the streets of Lakeside from 1-4 p.m., departing from Pavilion Circle.

To celebrate the 140th Anniversary of Hotel Lakeside, a Birthday Celebration will be held from 1:15-1:30 p.m. on the Hotel Lakeside lawn. Lakeside Chautauqua President & CEO Kevin Sibbring will provide a brief history of the Hotel Lakeside during the celebration, and there will also be a large banner for guests to sign and write a special memory about the hotel.

Horse Drawn Carriage Rides will take guests through the streets of Lakeside from 1-4 p.m., departing from the Pavilion Circle. Four rides will take place per hour, with a maximum of 20 people per ride.

Throughout the afternoon, guests can also enjoy live entertainment by the Cakewalkin’ Jass Band from 1:30-4 p.m. on the Hotel Lakeside lawn, under the white tent.

The band formed in 1967, after only playing a few small gigs together. Then, in 1968, they played their first show at Tony Packo’s Café, in Toledo, Ohio, where they would continue to headline for 35 years. With a repertoire that now includes more than 490 original songs, the Cakewalkin’ Jass Band will bring Lakesiders to their feet with their authentic New Orleans style music.

From 2-3 p.m. at Pavilion Circle, the Ohio Division of the Wheelmen will perform a cycle trick riding demonstration.

The Wheelmen is a national, non-profit organization dedicated to keeping alive the heritage of American cycling, promoting the restoration and riding of early cycles (1918 or earlier) and encouraging cycling as part of modern living. Members are intent on learning lost skills, retelling lost stories and researching the golden era of cycling.

Coinciding with the Heritage Day activities, guests of all ages are invited participate in Lakeside Field Day. The event will take place from 3-4:30 p.m. on the Hotel Lakeside lawn, near the Gundlach Garden at the end of Oak Avenue.

Teams will compete in various Field Day activities. Registration for Field Day is free; donations are welcome. Sign up from 12-3 p.m. at the blue tent near the Hotel Lakeside Conversation Terrace along the lakefront.

The Tilson-Snider Family Gathers for a Fall Celebration in Lakeside

Dance to the Music