Why is Lakeside Significant? 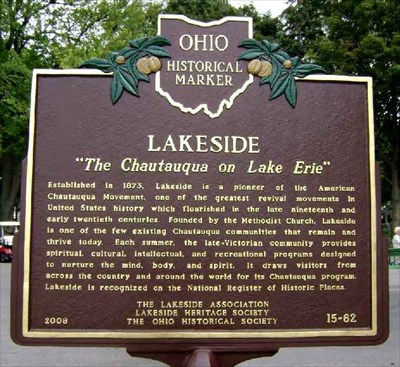 Lakeside became a Historic District on the National Register of Historic Places in 1983.

“Lakeside is significant to the nation as the largest and most intact Camp Meeting/Chautauqua ground remaining in the U.S., which is still functioning according to its original organizational plan. It is also one of the longest continuously operated such resorts in the country, having formally opened in 1873. Lakeside is a rare survivor of two of America’s foremost 19th century cultural movements, which were established at Lakeside by nationally prominent religious/cultural leaders. Additionally, the range of architecture, from simple frame cottages to the massive 3,000-seat auditorium, is an excellent representation of both indigenous and unique ‘camp meeting’ forms.”

This is quoted directly from the Lakeside National Register Nomination submitted to the U.S. Department of the Interior, National Park Service. The nomination document contains 142 pages, one of them being a letter from Tom Edwards, Executive Director of Lakeside at the time. The letter to the State Preservation Office included the following:

“There is a high level of interest about our nomination in our community. The results of a recent marketing research survey conducted by Bowling Green State University show that 90% of the property owners feel that historic preservation is important or very important to the future of Lakeside. Numerous private and business interests have indicated to me an intent to invest restoration dollars.”

Lakeside is certainly not alone in being a Historic District. In the U.S., there are currently more than 2,300 Historic Districts with Preservation Boards. After the World War II, Historic Districts were promoted due to the thought that Americans weren’t feeling a strong sense of roots, and to also provide a sense of orientation. The National Register of Historic Places was consequently formed in 1966.

Historic Districts do not get their protection from the privilege of being on the National Registry, but from the Preservation Boards created as a result of this.

Legal foundation for local historic preservation legislation is firmly upheld, as long as there are well-thought-out criteria and standards, good hearing procedures, well documented records, etc.  The regulatory authority of local commissions has been consistently upheld as a legitimate use of government police power since a case in 1978 involving the City of New York.

From the National Park Service, “Guidelines consist of written and graphic information in a printed, book format, they are key support materials for administering design review and may be used to advantage by commissions, boards and applicants alike in the review process.”  The benefits of Historic Preservation Boards are incalculable, but have definitely been proven to be positive.

“Historic Preservation Guidelines & Design Review Procedures for Lakeside” by Gaede Serne was created in 1993. Through this process came the establishment of our Historic Preservation & Design Review Board (HP-DRB). In the letter accepting these guidelines and procedures, Philip Zimmerman, Executive Director of Lakeside at that time, stated, “These guidelines are the culmination of efforts that began when the Lakeside grounds were listed as a Historic District on the National Register of Historic Places. They are in fact the beginning of the preservation effort itself.”

It also states within the Gaede Serne guidelines, “When listed on the National Register of Historic Places, there is the added desire to meet the expectations of the federal listing.  Lakeside is so listed and must be conscious of its special qualities to maintain its standing.”

The Historic Preservation Guidelines in the Gaede Serne document are the original Preservation Rules & Regulations of Lakeside. This document is still in effect and has been updated as needed over the years.

The creation of Historic Districts effectively demonstrates public commitment to an area.  Through the very existence of HP&DRB, new investment in Lakeside is encouraged. People choose historic districts, as they like to know what they can expect and how their investment will be protected. This is not to say that economics is the only reason for Preservation Boards by any means. Other benefits include educational, environmental, cultural, aesthetic, historical and social impact.

Lakeside, as well as its historic presence, is a treasure worth protecting. As we approach Lakeside’s 150th anniversary, it’s hoped that it will continue to work its magic on all who pass through its gates for many decades to come. Rhythmic Circus: My Favorite Hoover Show of the Summer

A Walk Down the Second Block of Lynn Avenue